How many conversations should you review? – Part 2

Let’s get practical! In this episode, we look at how you can reach your review target with some use case examples. Mervi, Klaus’ resident Data Scientist, helps you understand which conversations are worth reviewing – and which are not. 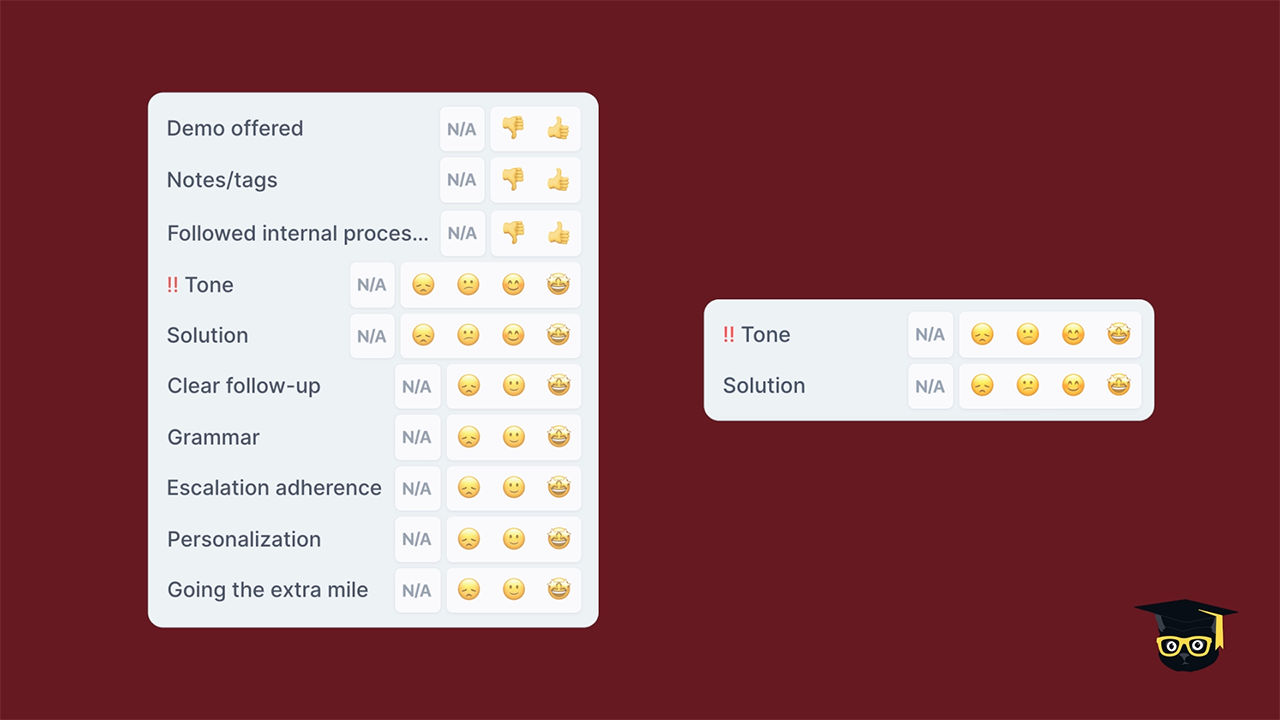 What categories to use? – Part 1

RILEY YOUNG: In the previous video, we discussed the different volume-based targets you could aim for, depending on who is performing your reviews. Now, we will take a look at some practical examples with different types of review set-ups.

All of the examples are based on a support team that handles around 1000 conversations per week.

In the first example, we will see that the main purr-pose of the review program is to provide support reps with feedback and help with their development. And with two managers performing the reviews, it makes sense to set a grading target around a fixed amount of tickets per support rep.

With each rep completing roughly 100 conversations per week, you would want to provide them with at least five reviews per week for consistent, regular feedback. With two managers performing the reviews, that would equate to 25 reviews per manager per week. This is an achievable target if the manager has dedicated time in his schedule to complete the reviews.

Let’s take a look at a similar scenario, this time with the team doing peer reviews. Again, it would make sense to have a fixed number of tickets as a target. Support reps would only need to review five conversations per week to pull off the same amount of total reviews as the two managers in the previous example.

Finally, let’s look at the same scenario, this time with a dedicated QA specialist. With only one dedicated reviewer,grading a specific percentage of your total support volumes – for example, 10% – becomes a real possibility.

In this example, grading 10% of total volume would equate to around 100 reviews per week. This is doable for a full-time employee, while also giving them time to work on reports and analysis. If the review assignment is balanced, then that would also equate to 10 reviews being received by each support rep. Now that’s a good amount of feedback to be receiving each week – don’t you think?

NARRATOR: Finding a target that is consistently achievable for your team is the perfect starting point. And remember that you can always increase your review goals over time. As a rule of thumb, if your goal is to have a detailed overview of how your department is performing, then try to get as close as possible to reviewing 10% or more of your total support volume.

RILEY YOUNG: For some teams, increasing grading targets to 10% or higher simply won’t work with the set-up that they have. To help you set an achievable review target, I am joined by Klaus’ Data Scientist, Mervi, for today’s Tip of the Day.

Klaus can help you remove these conversations and make your review process much more effective. For example, if you keep the review target the same 100 reviews and ignore 35% of the ineligible conversations, you can increase the review ratio to 15% by reviewing 100 tickets out of 650.

A final thought before setting your grading targets should be – Is it scalable? If your business and support teams are likely to grow over time, you should already think about how this will be reflected in your review goals. Your managers may currently be able to review five tickets per support rep, but if their teams double or triple in size, will they still have the time to do so?

If your support volume continues to rise and you can’t afford to have your support reps offline while they perform peer or self-reviews, your quality program will begin to fall apart pretty quickly. The simplest way to prevent these situations is to consider hiring a dedicated QA specialist as early as you can.

Join us next time, when we dive into which rating categories you should use when performing your conversation reviews. Thanks for watching!

ANDREAS VIRKUS: How do cats get over a fight? They hiss and make up. [drum sting]